People have lived in the landscape around Epiacum for about 10,000 years, ever since the end of the last Ice Age.

Prehistory is divided into the Stone Age, the Bronze Age, and the Iron Age.

The Stone Age is further subdivided into the Old Stone Age (The Palaeolithic), the Middle Stone Age (the Mesolithic) and the New Stone Age (the Neolithic). This can all sound a bit complicated, but is actually quite straightforward.

Of course, no-one alive at the time thought of themselves as living in any one of these periods, which modern humans describe by the technologies that were used: iron, bronze and stone. Archaeologists often keep themselves amused by arguing about when one particular period ended and another started, but in fact all such changes were gradual and probably occurred over several generations.

There can be no doubt that people visited the Alston area, and quite possibly lived their entire lives here, in the Palaeolithic, but all evidence of their presence has been eroded away by the great glaciers that later scoured the landscape during the Ice Age. When the ice retreated for the last time, a little over 10,000 years ago, people who we describe as ‘Mesolithic’ moved into the area. At the time, the landscape was open tundra, and the people moved across the country in small groups, hunting, fishing and scavenging for food.

As the climate warmed up over subsequent centuries, the entire landscape became clothed with mixed forest

People adapted to this changing environment, and continued to move around the landscape, living in temporary campsites as they made use of natural resources in different places at different times of year. The earliest definite evidence we have for people in South Tynedale comes in the form of small stone tools (‘microliths’), which have been found in many places throughout the North Pennines and date from about 7,000BC.

The Neolithic period begins in about 4,000BC and saw many fundamental changes in the ways that people lived their lives.

The most profound of these changes was the adoption of farming. Although hunting and fishing were still important, farming enabled people to produce their own food, leading to new ways of living in, and thinking about, the world. As they were farming, Neolithic people were more tied to specific locations. They built communal ceremonial monuments such as stone circles, developed new types of stone tools, and used pottery. Evidence for Neolithic people in the vicinity of Whitley Castle is sparse, but a possible ’henge’ (a type of ritual enclosure) has been identified near Alston, which could demonstrate their presence here.

In about 2,400BC, the Neolithic gave way to the Bronze Age, as bronze technology was introduced to Britain from the continent. 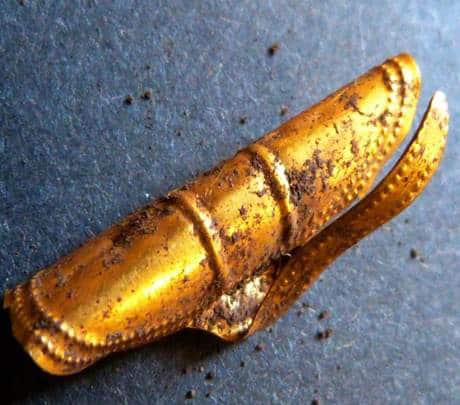 However, people continued to use flint throughout much of the Bronze Age. The impact of the first metal objects must have been profound, and the people able to manufacture them were probably regarded with awe. Some Bronze Age people were buried with grave goods in burial mounds; one such mound near Whitley Castle was excavated in the 1930s and found to contain gold hair tress ring, now in the Great North Museum in Newcastle. Read the story of the remarkable discovery of its pair by the great great grandson of the original finder. By this time people were living in small homesteads of timber-built roundhouses, and farming crops and animals. Survey work by English Heritage has identified some possible Bronze Age homesteads in South Tynedale, but none has yet been investigated.

The Iron Age begins with the introduction of iron technology in about 800BC.

This was an important development as it enabled the production of better quality tools and weapons from widely available, local sources of iron. Many farmsteads and associated field systems have been recorded, but without excavation it is impossible to be sure whether these date from the pre-Roman Iron Age, or whether they only came into use during the Roman period. It seems likely that some of these sites did originate in pre-Roman times, and some may have remained in occupation throughout (and perhaps even beyond) the Roman era. These native people are referred to as Romano-British.

Check out our Events Page!