History in the Landscape

The 1000 acre farmstead of Whitlow and Castle Nook demonstrates a continuous and ongoing relationship between the landscape and the people who have lived in and visited this place over at least the last 3000 years. It overlooks the meeting of five valleys which connect communities, markets and producers across and beyond the high hills of the north Pennines.

The 2010 English Heritage LIDAR survey identified that the landscape has been valued and managed in many different ways. This is supported by historic documents and deeds citing the landholding and some of the people who have lived here. These include:

The current sympathetic landowners, who manage this land for cattle and sheep, are the most recent people living off this land and recognise their role as custodians for the future, hence their instigation of Epiacum Heritage Ltd and their concern for the legacy of the heritage and the management of the landscape within which it sits.

There is a long tradition of public access to the farm. The Pennine Way follows the old Alston – Brampton Road, bisecting the farm and skirting to the south of the Roman Fort and Vicus, while the Maiden Way Roman Road passes to the north of the site. The 19th century brought the new turnpike road and the steam railway to the valley, both of which pass between the fort and the River South Tyne.

We have constructed a brief summary of local archaeology, presented in these sections:

Map of the Roman frontier in the 2nd century AD. 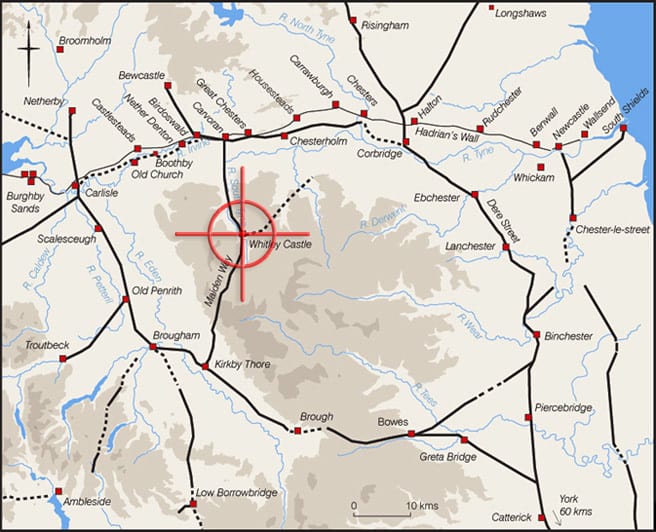 This map, produced by English Heritage, shows Epiacum in relation to the Roman road network of northern England. The North Pennines are surrounded by Dere Street to the east, the Stanegate and Hadrian’s Wall to the north, and the main road from York to Carlisle, now followed by the A66 over Stainmore, to the south, and the A6 to the west. The Maiden Way runs between Kirby Thore and Carvoran, and was presumably linked to lead and silver exploitation in the heart of the North Pennines. The possible road between Epiacum and Corbridge is shown as a dashed line.