Our Man In Pompeii : Or Is It Herculaneum?

The drop on Friday didn’t go as well as Big E had planned.

Sure, I made it to the airfield on time only to run in to a whole stationery shop of red tape and some jobsworth insisting my zippo had to be in a clear plastic bag.

Just when I thought everything was back on track the comms unit buzzed in to life with message from Big E:

This was tough news.  I always worry when an agent loses contact, and I know Big E worries more – unless it’s me: she knows I’ll be hiding in a bar somewhere trying to put it all behind me.

Still the job was still on.

I was just about to board when I spotted a group hanging suspiciously around Pret-A-Manger.  The trowels sticking out of there socks gave me a hint and then I recognised the dark haired woman obviously in charge.  Agent Chester from Etruria Nova.  So they were putting a big team together too.  This job must really be a big one.

I thought I’d introduce myself.  She didn’t seem surprised that I was there.  She’d also heard the news about Agent C and was clearly perturbed.  We decided to join forces.

Four hours later and we’re all in a taxi careering towards Pompeii in 30 degree heat.  Man, I’ve seen suicidal traffic in my time, but only Kathmandu beats the drivers here.  Even the job in Morocco seemed less likely to end in a RTA. 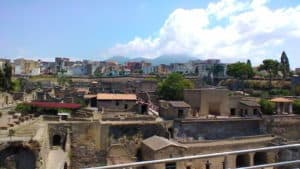 In order to lower my blood-pressure, I looked out of the side window and suddenly there it was – Vesuvius.  The devil of fire and death.  That mountain has haunted my dreams since I was a child and the sight of it sent a shiver down my spine.  Not even the sight of Everest rearing its majestic head above the clouds on the decent to Kathmandu had such an impact.

It looked so peaceful yet there we were racing towards it like Pliny the Elder when every primaeval instinct seemed to urge me to head the other way.

Agent Chester dropped me at the safe house in Pompeii and I did a masterful job i passing myself off as a bungling English tourist.  In the space of two hours I snapped the key in to building, sat on the chair on the terrace and went through the seat, and got chased down the road by an Italian restraunter who was astounded I hadn’t stayed for the second course.

I was about to turn in when the comms flicker twice.  A message form Big E.  Agent C is landing on Monday.

Then from Agent Chester.  She wants to approach the Pompeii job from the side.  We’re to meet at the Sanctuary at 0840 hours the next day. 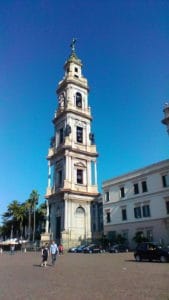 The next morning it takes me a few moments to realise where I am.  Then I remember.  Pompeii.

I’m early for the rendezvous but the others soon arrive.  Agent C hands us all a slip of paper.

“This will get you in to Pompeii, free of charge and before the public.  It will help in your task greatly.” 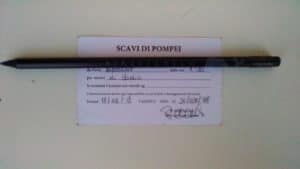 I make a note to try not to lose it.

“But first, the background, we are taking the train.”

An hour later we’re walking the streets of Ercolano or Herculaneum as it’s better known.  It’s blisteringly hot though not as hot as it was in 79AD.

This small coastal tourist town was obliterated on the first day of the eruption, when the super heated cloud of ash collapsed and rolled down the shoulders of Vesuvius.  And it came at speed.  At speeds of over 150mph and at a temperature of 600 degrees centigrade it ripped across the land, wiped and Herculaeum and reached the sea in about 15 minutes.

No-one had a chance.  The eruptions of the following days caused massive mud flows that covered the town and on top of that the ash fell, sealing Herculaneum for 1700 years.

We spilt up and explore in our own ways.  I marvel at the preservation, at the artwork. 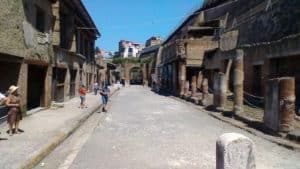 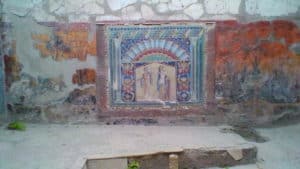 There are some places where the history around you and beneath your feet is overwhelming.  I feel it here.

I follow a street down the slope to the town and see an arch.  I know where that passage leads.  It heads to the boat sheds that stood on what was once the shore. 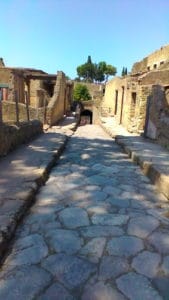 To the boat sheds

I know what I will find there.  It is still a shock. 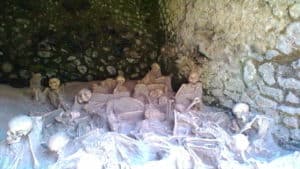 As Vesuvius erupted the people of Herculaneum, terrified and panic stricken headed to the boat sheds, seeking shelter and hoping to be rescued.  All that came was death.

It’s impossible to look on such scenes and not be moved.  I haven’t felt so disturbed by a historical site since I stood in the room in the villa at the side of Wansee Lake outside Berlin where the Final Solution was signed off.

I walked back up in to the town.  All I could see in my mind’s eye were the people running for their lives, terrified, trampling each other, all of them doomed.

We get back to Pompeii and there are police everywhere and they’ve closed the roads.  It’s Pompeii’s gay pride march today and theyre worried ‘the Disruptors’ as Agent C calls them will turn up to cause trouble.  The day seems suddenly surreal.

I’m meant to be standing down tomorrow.  But I plan to be up with the lark and get in to Pompeii and check it out for myself before getting assigned to the real dirty work on Monday.

« Our Man in Pompeii : Final Preparations
Our Man In Pompeii : The First Recce »