Our Man In Pompeii : Ampitheatre Fiasco

I manage to pack all the work gear and head for breakfast three quarters of an hour before they serve breakfast here.  My hunch was right – breakfast is all set out, so I grab a quick croissant and juice and then throw some additonal items – a roll, ham, another croissant, boiled eggs – in a lunch box for later.

By 0715 I’m waiting outside the entrance to the Ampitheatre – the magic key got me through the gates.  There’s not a soul about other than a man in a little truck emptying the bins and a stray dog.  Despite the early hour, I can feel the heat building.

Its 0730 and there’s still no sign of Agent Chester and her accomplices.  The man with the little truck has headed for new bins and the dog has wandered off.  There’s just me and Pompeii.

By 0738 I’m beginning to worry.  I send a comms to Agent Chester confirming the meeting place at time, but when there’s no reply by 0755 I decide to break radio silence and call her.  The phone just rings out in to a vast void.

Something’s gone wrong.  Maybe I misheard her on Saturday.  Maybe she said the main theatre.  Damn these Romans and their love of dramatics!

I decide to check out the theory so move trough the deserted streets heading for the theatre quarter.  Pompeii is silent, whispering and enigmatic.  The theatre quarter is as empty as it’s been for most of the past 2000 years. 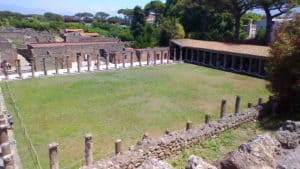 In the triangular forum I spot a man with a sweeping brush and ask if he’s seen a group of about ten England people led by and Italian agent.  He shakes his head and looks sadly at me as if such things are possible at this time in the morning.

Perhaps they’re already in the target area?  I get my bearings and head back to Regio VII Insula XIV.  It’s as deserted as the rest of the town. 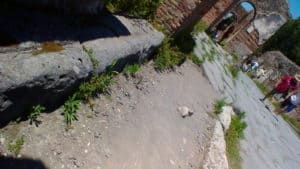 This is getting serious.  I need to regroup and rethink so I head back to the Ampitheatre.  No sign of anyone so I walked down the entrance slope and into the bright sunshine of the arena.  Making my way to spot where I think Nick Mason had his drum kit in the Floyd’s classic “Live at Pompeii” gig, I sit down to think.

I try Agent Chester again.  No joy.  I make a decision.  I haven’t had a coffee.  That needs sorting first.

At the main entrance I hit a snag.  They’ve locked the gates until they open for the public at 0900.  Somehow I’ve got locked in at Pompeii!  I kill the time by studing the famous casts of the people who died here that they keep locked in some sort of curving, tubular greenhouse.  It must be hot in there.  I can’t help feeling that there’s something deeply incongruous having these remains displayed in bright, life affirming sunshine.

0900 arrives – as I find it usually does – and I make my way back to the safe house though taking a long detour to get more supplies.  It’ll save time later.

My favourite coffee bar is shut, though the stray dog is still lying outside it.  Like me, he didn’t know it is closed on Mondays.

I get a coffee at the safe house and lie back on the bed to chew things over and ponder my next move.  Then I fall asleep. 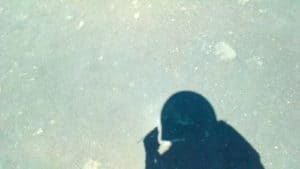 I awake with a start, to just the beating of my heart, at noon.  I decide there’s nothing to be done but to open the envelope with the emergency contact number.  I dial and an Italian voice crackles over the phone.  I give the codeword and suddenly I’m speaking to Agent Chester:

“I was outside the entrance to the Ampitheatre at 0715 as agreed.”

There is an awkward silence and then she continues:

“Never mind.  You know your way to Regio VII, Insula XIV?  Meet us there as soon as you can.”

I move fast.  It’s five minutes to the ruins and the magic key does its trick.  Yesterday’s recce pays dividends now as I pick a route through the quietest streets, avoiding the tourists: down the Via Di Castricio, turn right up the Vicolo Di Paquius Proculus, left on to the Vicolo Del Menandro, right on to the Via Stabina and then a final left on to the main drag, the Via Dell’Abbondanz and Regio VII.

I reach Insula XIV.  The target area is empty. 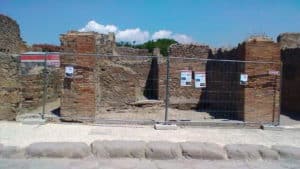 Then, I catch a glimpse of a figure passing across a doorway in one of the interior rooms of the house.  I take my chance and slip around the barrier and weave around the maze of what was once a shop.

There, sitting with their backs against the wall, hugging the scant shade are Agent Chester’s accomplices.  A moment later Agent Chester herself arrives.

I follow in to one of the back rooms that still has an intact roof and so is mercifully cool.  There, sitting on a stool with her wrist in a support bandage and a bandana over her head sits the boss.

Oh man, two Big E’s.  This is going to get confusing.

“So what happened?” she asks smiling.

Agent Chester and I run through our differing version of events… and all becomes clear, so clear that we can’t help laughing.

When Agent C had said meet at the Ampitheatre entrace, she’d meant for us all to enter by the staff entrance that leads to the east entrance of the Ampitheatre.  One of her current accomplices was hear last year and knew that, so that’s where they headed.

I didn’t know about the staff entrance.  So I’d headed through the main gate and ended up at the western entrance of the Ampitheatre.

We were waiting to meet each other at opposite sides of the Ampitheatre… and it’s a damn big Ampitheatre.

By the time I’d called Agent Chester, they’d given my up for lost and moved on to see the pottery and fresco preservation labs and her phone was off.  They hadn’t reached the reached the target area when I first passed it.

Oh how we laughed.

“And now,” said Grande E (as I think I should call her), “You’re just in time to go home.  We’re aborting today’s mission.”

I was a littl shocked but apparently the others had been fried by over briefing and the heat – the damn heat – and so the decision had been made to let them finish early.

“Sure,” I say, and hand her the Epiacum Research Framework.  “From Big E – with her compliments.”

Back at the safe house there’s a comms message from Agent C.  She’s landing tonight and needs a briefing.

I notice that the keepers of this place have replaced my broken chair.  I sit down to file my report for Big E and hear the unmistakeable crack of breaking plastic. 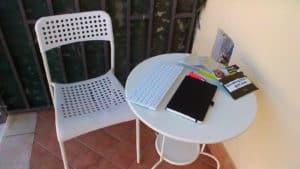 It’s the heat – the damn heat.

« Our Man In Pompeii : The First Recce
Our woman in Cyprus: developing international partnerships »