Epiacum On A Perfect Summer Evening

Jean Lunn is a great friend and supporter of Epiacum.  As one of  the team who took part in the only official excavation to have taken place within the fort itself in 1957-59, she has followed our progress with great interest and helped us greatly with her knowledge of those excavations and her continued support.  Here she reports on her latest visit to the fort. 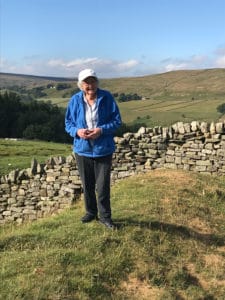 Jean on her perfect summer’s evening

What is an ‘Argo cat’? clues: it’s not feline, it’s definitely not soft and furry and to enjoy being in it you need a cushion or two – OK I’ll explain.  It is an all-terrain small vehicle, and this week I was taken in one on to the top of the grassy knoll on which stands Epiacum Roman Fort near Alston (formerly known as Whitley Castle.)

Elaine Edgar of Epiacum Heritage very kindly offered me the chance to revisit the fort many years after I took part in the only official excavation on the site in 1957-9.  Hence my need for help to reach the top.  Until she suggested the trip I had given up all hope of ever seeing it again and I am extremely grateful to her and her son Ian, for giving me the opportunity to do so.

It was on a perfect summer’s evening – the views were wonderful but owing to the drought, the huge brown areas of pastures and fell had me worried – though on the fort they highlighted the tops of walls and stony areas of the remains.   We wandered slowly around – examined the small annexe to the headquarters building near which my brother David found a lump of lead ore many years ago – its presence a reminder of the reason that the fort was built in the first place – to guard the mineral deposits and the Maiden Way, the Roman road over the shoulder of Cross Fell which runs from Carvoran on the Roman wall to Kirby Thore, in the Vale of Eden.

We then set off towards the south east corner and through a gate onto the site of the corner tower.  A sentry up there would have had a remarkably clear view of any enemy trying to approach the ramparts.   I imagined the cavalry barrack blocks to the north where men and horses shared the same living space and the infantry blocks to the south, the headquarters building and the commandant’s house – and the various sites of the bath houses.

Below the deeply incised trenches and ridges of the ramparts to the south was an area which archaeologists have now confirmed as the parade ground along with the podium from which the commanding officer took the salute, now a brown patch among the rushes.  Imagine all the infantrymen and cavalrymen lined up with their weapons, trumpets and flags flying – the horses restless and their riders trying hard to keep them in order.  What a spectacular sight!

Then of course, close by there were the small dwellings of the civilians and possibly the soldiers’ families and all those drawn to the safety of being near the fort, with their small patches of gardens and many small lanes running between and linking them – all revealed by the use of Lidar and other surveying techniques in recent times.   I expect there were traders and small workshops and food stalls and all the usual buildings required to meet their needs.  It would be a busy place and all suitable parts around the base of the ramparts would be used. 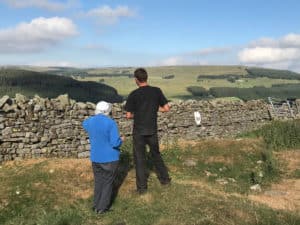 Jean and Ian check out the problematic field wall

There is now a plan afoot to remove the drystone walls, built in the 1800s at the time of the enclosures, which run across the fort and which are a hindrance to both the archaeologists and public alike – I am happy to be supporting this effort which will be quite a costly undertaking as each stone has to be examined by an archaeologist and moved by hand with care and transported off the fort in wheel barrows.  But who knows how many Roman stones will be found?  What a treasure.  Following in the BBC tradition, time to do the job will be strictly limited to a fortnight in September coming.  Could you contribute? Every little helps.

On my return to the farm Ian pointed out the likely site of the fort’s Temple to Mithras (the special god of the military) which reminded me that Noel Shaw, who led the excavation in the 1950s, found the Mithras Temple at Carrawburgh near the Roman Wall after a particularly dry summer when the parched turf drew back over the tops of its three altars.  I wonder if Epiacum will yield any of its secrets in 2018?  – I do hope so.

I continue to marvel at the advanced technology that the Romans brought to our isolated upland area and grieve a little at the terrible waste of talent when they left.

« You know that feeling when there is a wall in your way?
Be part of something you will remember for the rest of your life…. »